My Audition For The Apprentice 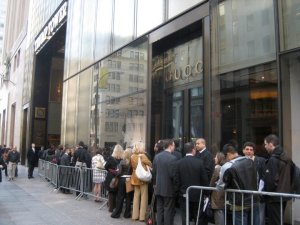 I played “hooky” last week to audition for The Apprentice. When I arrived at Trump Tower, there was a line around the block. Having previously tried up for the show, I knew it was about a 3-hour wait. Fortunately, I knew someone who got me on the “VIP” list and, PRESTO, I went right to the front of the line. Did I feel bad about jumping over others who had camped out overnight wearing suits and ties? What do you think?

The interviews were held around a “boardroom-like” table in the lower level of Trump Tower. As I descended the escalator, I watched a group of would-be Trump juniors literally screaming at each other in an attempt to impress the casting producer. Not sure that volume and hollering make up for appearance, intellect and experience, but I guess everyone has their own strategy.

As I waited from the screaming Banshees to finish, in strolls “THE  DONALD” and he sits down at the same table to which one of the ushers has just directed me. I approach and give him a big broad smile. He remains stone-faced, however, and doesn’t even acknowledge my existence (or anyone else’s). He obviously is not interested in being there and my guess is that he has to show up per his contract.

The casting producer collects our applications and, then, asks us to introduce ourselves and state from what college we graduated. What college? Are you freaking kidding me? After proving myself in the real-world for 20+ years, they want to know where I drank beer and chased girls?  C’mon.

As THE DONALD gets up to visit another table, we are then asked “Who is responsible for the recession?” and told to debate. I lie low waiting to pounce on something stupid that one of the others might say.  But, then, out of the corner of my eye, I see

that all is lost. The casting producer isn’t paying attention. As if it wasn’t difficult enough to get noticed among a cattle call of 800+ people, I got a Casting Producer who has things to do other than cast. He’s checking his Blackberry, he’s having a conversation with another worker, he’s picking his nose. He’s doing everything but pay attention to us.

After a few-minute debate, we are thanked for coming and told essentially “Don’t call us, we’ll call you”. Too bad, I would have done a great job at creating a commercial for Superman 12 or pimping Kodak’s newest camera.