How Much Leeway Do Cops Give Speeding Motorists? 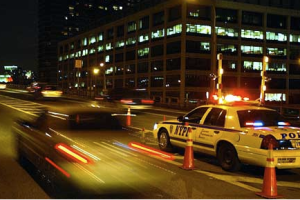 The USA Today published an article yesterday entitled “Speeding ‘cushion’ may dwindle due to recession“.  The premise is that the economic downturn will likely result in police departments providing less leeway to speeding motorists.  That is, most police officers will not stop a motorist for speeding unless he or she is traveling 5 to 10 mph over the limit.  According to the author, Larry Copeland. this “cushion” will be reduced or disappear as municipalities struggle with deficits and decreased tax income.

The National Motorists Association, a Wisconsin-based drivers’ rights group is quoted as saying that speeding tolerances are less and the frequency of warnings instead of a speeding ticket is lower.

A study published last year in the Journal of Law and Economics found that more traffic tickets are issued during recessions.  Likewise, researchers from the St. Louis Federal Reserve Bank and the University of Arkansas-Little Rock found that “a 10% decrease in revenue growth caused a 6.4% increase the following year in the growth rate of traffic tickets”.

In New York, police officers usually give a 10 mph cushion. I rarely see tickets issued for speeding 1 to 9 mph over the limit and we handled over 3,000 New York traffic tickets last year.  While this may change, to date, I have not observed a lessening of the cushion.  Nevertheless, I always recommend slowing down if you see a police officer nearby and you are proceeding at or near the limit (and never pass a police officer on the highway unless he or she is going below the speed limit).

Matthew Weiss
Matthew J. Weiss, Esq. graduated Hofstra Law School in 1984. He was Law Review and won the law school’s prestigious Procedure Award. Upon graduation, he became one of the first Hofstra Law School graduates to work at the New York State Court of Appeals (New York State’s highest court) working on various appellate matters.
Previous Post
What Not To Do After Getting A Speeding Ticket
Next Post
The “What To Do If You Sell Your Car” Checklist

Blocking The Box (aka Gridlocking) No Longer A Moving Violation In New York City
21 Mar 2009
149 Comments
Warning To Traffic Cops: Don't Eat Food Prepared By Those You Issue A Traffic Ticket
7 Mar 2010
2 Comments
Google Glass Should Be Illegal (Part I)
27 Feb 2013
4 Comments