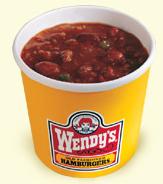 Wendy’s Chili’s is rich and meaty, and low in fat and high in fiber.  It also can be hazardous to your health.

On January 30, 2010, at around 10:30 am, a truck driver crashed into a house in Lowell, Massachusetts.   The cause of the crash …. its driver choked on Wendy’s Chili that he was eating while driving.

The truck driver reported that he choked on the chili after his truck hit a speed bump causing him to lose consciousness.  His flatbed truck veered off the road and struck the house.

Lowell Police say that he may be charged with “eating while driving”.  New York does not have such a law.  The closest statute here is the vague moving violation of “dangerous driving”.  In all the 1,000s of traffic tickets which I have fought through the years, I have never seen anyone charged with committing a dangerous driving charge from any type of fast food.