How To Avoid Being Scammed By NYC Taxi Drivers 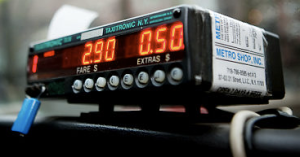 It has been widely reported that many New Yorkers have been ripped off by un-scrupulous cab drivers.  In particular, roughly 3,000 New York City yellow cab drivers have been involved with over-charging passengers to the tune of $8.3 million for more than 2 years.  About 3,000 of the drivers have perpetrated their scam more than 100 times.

The scam is quite simple.  Rather than switching the tax meter to the “inside the city” rate, the drivers would set it to the “out of town” rate.  The latter rate is double the in-city rate.

So how can you avoid being ripped off?  On the far left side of the meter is a number between 1 and 4 (1 is displayed in the above photo).  A number 1 is for in-city trips (.40 cents per 1/5 mile).  A number 2 is for trips between Manhattan and JFK airport (a $45 flat fee plus tolls and a .50 cent NYS tax surcharge).  A number 3 is for trips to Newark Airport (meter fare plus $15 surcharge and a .50 cent NYS tax surcharge).  Finally, a number 4 is for trips to Westchester, Nassau or other out-of-city destination (double the metered rate plus tolls).  The dishonest cabbies use the number 4 out-of-town rate rather than the number 1 in-city rate.

With prosecutions and loss of TLC licenses coming, it is less likely that New Yorkers will fall victim to this scam.  However, it can’t hurt to make sure you are being charged the right rate.